Find out why Car and Driver’s Michael Simari called the 2019 Nissan Maxima “a modern, relatively comfortable, and quietly athletic sedan.”

Another year means another model for the Nissan Maxima, and the 2019 edition is a monster value. Car and Driver had a chance to review the sexy sports sedan, with a rave review written by Michael Simari. From the “sporty, aggressive” exterior appearance to impressive V6 beating within, the 2019 Nissan Maxima’s fantastic features won it a 4.5 out of 5 and an Editors’ Choice award. Here’s the details on why Car and Driver said, “the Maxima offers the most balanced mix of style, luxury, and sport.”

The 2019 Nissan Maxima received a few tweaks this year. As Car and Driver listed, the sports sedan received some minor updates to both the interior and exterior design, as well as new safety and multimedia features.

New standard features for all trims include a rear-door alert, two USB-C ports and a driver-attention monitor.

The Platinum trim packs semi-aniline leather and quilted inserts for the seats as well as the new Rakuda Tan color choice.

Safety Shield 360 makes an appearance, as the safety suite is now optional for the SR and standard for the Platinum trims. Drivers will enjoy the front and rear automated emergency braking, blind spot monitoring and other driving aids. 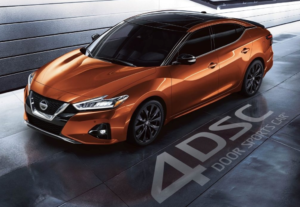 Of the 5 different trim models available, Car and Driver found the SR trim to be the best choice. The car site said that the SR’s “performance-oriented bent endears it to enthusiast drivers.” They praised the sport-tuned suspension, 19-inch wheels as well as the leather-and-microsuede covered seating. Car and Driver felt that the SR’s inclusions “provide a welcome dash of athleticism without compromising ride quality or overall luxuriousness.” The SR trim comes in at $40,425 dollars, the S, SV, and SL trims ranging from $34,845 to $39,335. The premium Platinum edition is also a choice for $42,335.

Powered by a 3.5-liter V6 engine, the 2019 Nissan Maxima has awesome acceleration and a sexy sound. Car and Driver praised the “sonorous V-6,” saying that it “moves the Maxima along with purpose.”

Capable of 300 horsepower, the 2019 Nissan Maxima Platinum pulled an Usain Bolt as it “sprinted from zero to 60 mph in 5.7 seconds.” Car and Driver praised the performance, stating that acceleration left the rivaling Kia Cadenza and Buick LaCrosse in the dust.

The 2019 Nissan Maxima is also a handling hero, especially the SR trim. Car and Driver said that in their testing, “the Maxima SR easily outhandled its rivals.” With strong dampening and firm controls, this sports sedan is hard to beat.

Car and Driver was thoroughly impressed by the fuel economy of the 2019 Nissan Maxima. The car site found that the Maxima had “good fuel-economy ratings as well as above-average real-world results.” The efficiency was so good that the sports sedan surpassed EPA estimates, hitting 32 mpg on Car and Driver’s 200-mile highway test route.

Upsides of the Insides

Not one to skimp on comfort and class, the 2019 Nissan Maxima’s materials and design deliver an impressive interior.

Car and Driver praised the spaciousness of the front seat, saying that front leg room exceeds all other vehicles of the class. The car site was encouraged by the many standard luxuries, such as the power-adjustable driver and front passenger seating, the push-button start as well as the leather-wrapped steering wheel and shifter.

The infotainment system was a big winner in Car and Driver’s view. Coming in at 8 inches, the infotainment touch screen features touch controls as well as redundant buttons and knobs for key features such as climate control. The car site made note of alerts such as curfew, boundary and speed warnings that could serve young and inexperienced drivers well. Drivers can also use the system to track their vehicle while they are away as well as remotely activate the engine and unlock the doors.

As we previously mentioned, the 2019 Nissan Maxima is a very reliable vehicle. The sports sedan won top place for “large cars” in the J.D. Power 2019 U.S. Initial Quality Study.

With a Top Safety Pick from the Insurance Institute of Highway Safety, the 2019 Nissan Maxima is one of the most well-protected vehicles on the road today. Car and Driver made note of key safety features such as the standard automated emergency braking and standard forward-collision warning.

Come check out our selection of the 2019 Nissan Maxima, winner of an Editor’s Choice award from Car and Driver and a top score for initial reliability from JD Power, today at Metro Nissan Dallas!