The 2019 Nissan Titan and the Titan XD are the two pickup truck models that make up the Nissan Titan lineup. Nissan released the first Titan model in the United States all the way back in 2003. The Titan’s first generation lasted from 2003 to 2015, and its second generation began in 2016. With the beginning of the Titan’s second generation in 2016 came the expansion of the Titan lineup to include both the regular Titan and the brand new Titan XD model. Let's compare the Titan vs. Titan XD!

If you’re considering making a 2019 Nissan Titan your next vehicle, you might find yourself feeling torn between the Titan and the Titan XD. Both of these pickup trucks are high-performing, reliable vehicles. They are very similar to each other, but there are some notable differences between them that are important to understand if you’re in the process of deciding which of these two models is right for you. 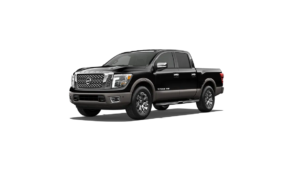 One of the most notable differences between the regular 2019 Nissan Titan vs. Titan XD is in their available engine options. The standard engine—a powerful 5.6-L V-8 engine that produces 390 horsepower and 394 lb.-ft. of torque—is the same for both the Titan and the Titan XD.

However, the Titan XD is exclusively available with an optional 5.0-L turbocharged diesel V-8 engine that produces 310 horsepower and 555 lb.-ft. of torque. When equipped with this upgraded engine, the Titan XD is also available with 6-speed automatic transmission and four-wheel drive that offers a smoother ride for both drivers and passengers.

The 2019 Titan XD boasts significantly higher towing and payload capacities as compared to the regular Titan.

While the regular 2019 Titan has a 9,380-pound maximum towing capacity and a 1,620-pound payload capacity, the Titan XD can tow up to 12,830 pounds and has a payload capacity of up to 2,990 pounds when equipped with an upgraded diesel engine.

The 2019 Titan and the Titan XD models look almost exactly alike. They both feature a straightforward design that prioritizes functionality and purpose. While the exact measurements of both pickup models are slightly different, these differences are only marginal and are virtually invisible.

If you’re curious, the Titan XD is marginally larger than the regular Nissan Titan model in length, width, and height. The Titan XD’s slightly larger bed is a pro for many drivers who are looking for maximum cargo space, but the regular Titan’s lower ride height and slightly smaller size makes it both easier to drive and more accessible for both drivers and passengers.

Both the 2019 Nissan Titan and the Titan XD are available in three different cab styles. These cab styles include one 2-door option (a regular cab) and two 4-door options (a 4-door extended King cab and a 4-door crew cab).

The Titan and the Titan XD are both equipped with an excellent, high-tech infotainment system that includes a built-in 7-inch touchscreen display with standard Android Auto and Apple CarPlay capability, Bluetooth connectivity for hands-free voice commands, a navigation system, and many entertainment options.

All in all, the standard 2019 Titan model is significantly more affordable than the 2019 Titan XD, which might make or break the decision of many drivers on a budget.