The Legend of the Nissan Z Continues

The Nissan Z-car is Nissan’s iconic, best-selling sports car. The Z-car has been a part of Nissan’s vehicle lineup since its initial release more than 50 years ago back in 1969. Since then, the Z series has gone through six generations of models.

The ratings speak for themselves as it is one of the top-rated, top-selling sports cars on the mainstream auto market. Plus, the Z-car lineup has proven itself as a timeless, durable series by remaining popular on the market for more than 50 years. The only problem is that the 370Z—the newest model—has been on the market for more than a decade without undergoing any major updates, upgrades, or redesigns.

Since 2009 when the 370Z hit the market for the very first time, Nissan drivers and car enthusiasts worldwide have been eagerly awaiting the release of the next-generation Z-car. Over the past few years, sales of the 370Z have understandably plummeted as more modern sports cars with more advanced features have captured consumers’ attention instead.

Over the decades that it has been on the market, the fan fave has reached legendary status as a sports car series. The Z-car series is renowned for its models’ drive performance, durability, affordability, and attractive interior and exterior styling. Even so, after more than 10 years, the Z-car series is in need of a new addition—and that’s exactly what’s in store in the very near future.

While nothing has been confirmed and any details regarding the launch and features of the newest Z  are unverified by Nissan, here are 5 things you should know about the next-generation Nissan Z-car model and its upcoming release on the mainstream auto market.

So far, the upcoming addition to the series has only been referred to as the “next-generation Nissan Z-car”. However, as the projected launch of the all-new model gets closer, rumors have been swirling about potential names for this brand-new Z-car.

Two name possibilities have come out on top: the 400Z and the 480Z. These two names are similar in that they both follow the established naming pattern of the Z-car series, and they both suggest that this all-new Z-car is a clear step above previous models in the series.

Both the 400Z and the 480Z seem to be viable options for the name of the all-new Z-car, but no one is quite sure which one Nissan will choose—or if they will decide to go a different direction altogether with the new Z-car’s name.

Many Nissan fans who are eagerly awaiting the launch of the next-generation Z-car expected that the newest Z-car would hit the market as a completely redesigned sports car.

However, this will probably not be the case. Instead of undergoing a complete redesign, the next-generation Nissan Z-car will likely be built on the same foundation as the 370Z and will be a front-engine rear-wheel-drive sports car like it has always been.

This way, Nissan will be able to update, upgrade, and add to the Z-car foundation in order to modernize the next-generation model while keeping the Z-car legacy completely intact.

The Nissan Z-car series is iconic and has been an integral part of Nissan’s vehicle lineup for more than 50 years. In order to appeal to drivers’ nostalgia and maintain the integrity of the car series, the next-generation Nissan Z-car will very likely feature retro styling that continues the legacy of the classic Z-car. 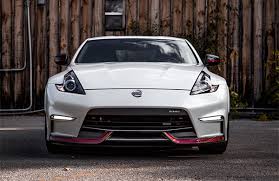 Round headlights and classic taillights that are reminiscent of earlier Z-car models are two retro-style touches that are expected to make an appearance in the next-generation Nissan Z-car. The interior of the all-new Z-car, however, is expected to be completely redesigned and modernized with a clean and simple finish.

The next-generation Nissan Z-car is expected to come equipped with a twin-turbo 3.0-L V6 engine that is paired with a seven-speed automatic transmission.

However, that doesn’t mean that the next-generation model won’t be available with optional manual transmission. Nissan has already proven in past prototypes and concept designs that they are able to pair their twin-turbo engine with a six-speed manual transmission, so there’s no reason that they wouldn’t be able to do the same with the all-new Z-car model.

The next-generation is expected to go on sale within the first quarter of 2021, which means there is likely less than a year left to wait before the all-new Nissan Z-car officially hits the mainstream auto market. However, only time will tell exactly when the release date will be and what will be in store for the next-generation Nissan Z-car. Contact us for more details about the legendary Z.